We are thrilled to announce that Mark Eisner, a member of Red Poppy's leadership team, has just been nominated as a semi-finalist for the 2019 PEN/Jacqueline Bograd Weld Award for Biography, for his book on Pablo Neruda: NERUDA: The Poet's Calling (The Biography of a Poet). PEN Prizes are not only considered a "major" award, but from an organization whose work we believe in wholeheartedly:

PEN America stands at the intersection of literature and human rights to protect free expression in the United States and worldwide. We champion the freedom to write, recognizing the power of the word to transform the world. Our mission is to unite writers and their allies to celebrate creative expression and defend the liberties that make it possible. 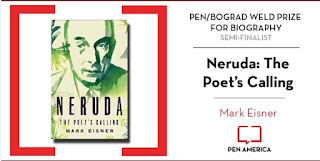 We've taken a little break from this blog but we felt that this would be a great opportunity to jump back in, as there is a lot of synchronicity between the book and Red Poppy's documentary-in-progress. Mark was involved with the first version of the documentary, and conducted all of the interviews. Below is an excerpt from the book that includes where he talks about the importance of the interviews. We will be starting to post those interviews on this blog.

For more information on the book, including reviews, cool photos from awesome events, tv interviews of Mark in the States, Mexico, and Chile, please click here.


....[When] I was asked to write this book. At first I thought, Why another book? So much had already been written on Neruda, including many works I admired. What would mine bring that others hadn’t?

I came to see a valid need for another approach, one that aims to bring Neruda’s gripping story to life in a new way. This volume is neither unbiased nor hagiographic; rather, it aims to offer a compelling narrative version of Neruda’s life and work, undergirded by exhaustive research, designed to bring this towering literary figure to a broader audience. My goal is to present the nuances of this complex, seemingly larger-than-life figure, to show all his vastness, to show both the redeeming and the cruel sides of his personal life, to show both the inspirational and the deeply troublesome sides of his political life.

In addition, I felt it was vital to unite, in a single volume, the three inseparable strands of Neruda’s legacy: his personal history, the entire canon of his poetry, and his social activism and politics both on and off the page. Each of these components depends on the other two. Each is shaped by the other two. No single thread can be understood fully without understanding the others. This book aims to deeply explore each of these three aspects of his life, while also highlighting the phenomenon behind their interrelationship. Without examining each of them extensively, the true expanse of Neruda’s story can’t be told.

From this, I also want to explore the multifaceted ways a reader can interpret Neruda as a figure in history. He was a man who gained celebrity status assuming the role of the “people’s poet,” while also acting as what some call a “Champagne Communist.” The contradictions are inherent within his multitudes, to paraphrase his hero Whitman. As Alastair Reid, Neruda’s favorite English-language translator, said to me, “Neruda is seven different poets, if not nine”: there is a Neruda for everyone. His legacy can be appreciated in different ways, but it is best understood in the context of the startling historical events in which he took part and the intense complexities of his life—from the shockingly shameful to the inspiringly heroic—while still absorbing the beauty and innovation of his poetry. Within the examination of those three strands—poetry, personality, and politics—is an exploration of the nature of political poetry’s power and effectiveness, and how Neruda’s role as a people’s poet, a political poet, connects to the shifting political climates of this new millennium. Because Neruda was so linked, so involved with major phenomena of the twentieth century, this book takes the reader through major historical events, including the South American student, labor, and anarchist movements of the 1910s, which tied into similar ones in Europe; the Spanish Civil War; the Battle of Stalingrad; Fidel Castro, the cult of Che Guevara, and the Cuban Revolution; and Richard Nixon’s interventions in Chile and Vietnam.

There was another impetus, inspiration, and source for this book: in celebration of the centennial of Neruda’s birth in 2004, not only did The Essential Neruda come out, but I also premiered a documentary film on him that I had produced. That initial version has led to a more ambitious feature-length documentary film that is currently in production. Work on the film has produced brilliant, unique gems for this biography, this text nourished by interviews and conversations with a diverse array of characters.

Unfortunately, some of the subjects have passed since I first talked to them. Neruda was born in 1904, so many of those who knew him for most of his life are no longer with us. One of these people was Sergio Insunza, minister of justice under Allende. Insunza was in his twenties when he first met Neruda, when the Chilean Communist Party brought the poet-senator to hide out in his apartment—then-president Gabriel González Videla had ordered Neruda’s arrest for speaking out against his antidemocratic, oppressive measures on the Senate floor. Another interviewee, Juvenal Flores, was ninety-two when I spoke to him. He worked on a ranch in southern Chile and helped guide the fugitive Neruda on horseback across a snowcapped peak in the Andes, safely into exile.

Then there was an afternoon I spent at one of Santiago’s main produce markets. When I asked an effusive woman in front of a vegetable stand about Neruda’s love poetry, she spontaneously burst out, “I like it when you’re quiet. It’s as if you were absent”—the iconic first lines of Neruda’s Poem XV in Twenty Love Poems. And then, with the biggest smile and half-laughing, she said, “That’s as far as I get, but it’s a beautiful book!” She told me that although she had read the poem as a young girl, in school, it gained a heightened significance for her six years before, when, at thirty-two, she had fallen in love with a Bolivian doctor. He eventually left Chile, giving her a copy of Twenty Love Poems as a departing gift.

I turned to Mario Fernández Núñez and asked him what he thought of Neruda. The whole time we had been talking, he had been preparing bundles of cilantro for his market stand. His hands did not pause in their work when he answered, “Well, he’s our national poet. He won the Nobel Prize.”
“And what does that mean to you?” I asked.

“Well, first, it’s pride, an honor. And secondly, for us, Pablo Neruda, beyond all the poetry, was a very good person. Remember that he was practically the ambassador—he brought the Spanish over here when Spain was in a dictatorship.”

These experiences provided breathing insight that could not be found on the printed pages of the books I found at the Stanford Library, the Biblioteca Nacional de Chile, the Library of Congress, or Neruda’s own archives, or in so many key sources I’ve been grateful for in between.
--from NERUDA: The Poet's Calling/The Biography of a Poet  by Mark Eisner
(c) Ecco/HarperCollins 2018

some of the interviews are pretty serious, talking about historic events, describing the nuances of Neruda and relationships, to start with, though, and as its mentioned about: a more light hearted clip from one of those interviews that shows the wonderful humanity behind it all.  Enjoy!